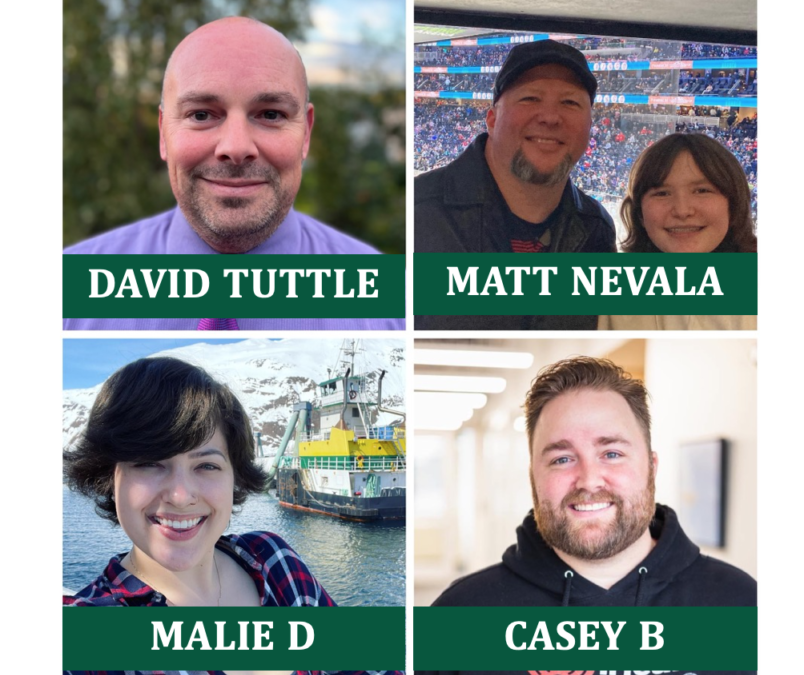 They’re the ones giving you information and entertaining you during the games – meet the personalities behind the microphones at UAA hockey games this season. This media team will create a great game experience at Seawolf Sports Complex. For fans who can’t make it in person, games will be broadcast live on the UAA Seawolves YouTube Channel.

David Tuttle is who you might consider to be the “voice of the Seawolves.” He’ll be the play-by-play announcer for the game broadcasts. In addition to calling games, he’s been playing the sport for more than 40 years. He loves the speed, physicality and intensity of what many of us consider the greatest game in the world. When it comes to hockey at the next level, Tuttle says, “I am a Colorado Avalanche fan first and foremost; I have cheered for them since they were the Quebec Nordiques, long before Joe Sakic arrived! I also cheer for the Vancouver Canucks. It was easier cheering for both when they were in different conferences.” Last year, Tuttle also claimed the Seattle Kraken as one of his top three teams.

Matt Nevala will add the color commentary to Tuttle’s play announcing. Nevala will share expert analysis and background information with a bit of levity. In his 32 years in sports media, hockey has been a good part of his life, as has his passion for storytelling. Nevala is eager to share information that helps fans take ownership of our hometown squad and show NCAA Division I hockey is part of Anchorage’s fabric through filling the stands and supporting the team. Nevala calls the Detroit Red Wings, also known as the Winged Wheel, his favorite NHL team. “The team’s presence in the Nevala family dates back decades, when my father and late grandfather would sometimes venture down to Detroit’s old Olympia to see the greatness of Howe, Lindsay and so many others in person. Tall tale or truth, my father briefly campaigned before I was born to name me Gordon in honor of Mr. Hockey. Dad got rebuffed, but that connection is why I’ve worn No. 9 on my back in most sporting events.”

Malie D. is providing media support and will moonlight as a National Anthem singer at some games. She said fans can expect, “an ever-growing belly and solid high notes” from the radio personality who is expecting her second child. She’s excited for a fresh dose of Seawolf Spirit this upcoming season. She loves the atmosphere, the game and how Seawolf hockey fans feel like family. Malie D. is a Vegas Golden Knights fan with a healthy appreciation for the San Jose Sharks.

Casey B. will be Alaska Anchorage’s public address announcer this season. Fans can expect positive energy and good vibes. He feels his job on the microphone is to help fans escape their daily lives for a few hours, watching a game we all love and HOWL for the home team! While he never played hockey growing up, he has always enjoyed watching how fluid and smooth athletes are while having knives on their feet. He’s a sucker for Pacific Northwest sports teams, particularly cheering on the Seattle Kraken, and is ready for this year. Casey B. says, “I’m excited about the vision that Coach Shasby has for the future of hockey in Alaska. Playing with a chip on our shoulder all year will be in our favor. One more thing, BEAT FAIRBANKS!”